Sewage sludge is a natural end- or by-product of the wastewater treatment process.  Millions of tons of toxic human sewage sludge are dumped in landfills, spread on agricultural land, or composted each year. Millions more tons are incinerated and on some parts of the planet raw sewage is poured straight into rivers and oceans. For a world so technically advanced, it would appear no real solution has yet been found for the complete elimination of such a highly toxic waste, a waste that is slowly poisoning our planet.

Facilities typically have very little control over material received. Often waste water treatment stations were established well before many of the industries operating in their areas were built.

Most sewage treatment works now produce more sewage sludge than they did in the past because of improved wastewater treatment standards and an increasing population.

Many wastewater treatment plants are ill-equipped to deal with the complex inflows, including prescription-drug residue, heavy metals and toxins generated by industry, with the result that the quality of the outputs – water and sludge (bio-solids) – are detrimentally affected. This begs the question – are bio-solids safe? Concurrently, many governments are legislating to tighten the standards that have to be met in the disposal and use of treated water and bio-solids.

The combination of these factors and the presence of increasingly vigilant environmental groups are creating pressure on wastewater treatment operators to upgrade facilities and improve output quality.

Most waste treatment plants dispose of their bio-solids in one of four ways:
•   Dumping in landfill sites or the sea
•   Spreading on land to grow crops
•   Composting
•   Incineration

All the logistics and possible manipulation or further treatment of sludge, like storing, transport, drying, pasteurizing, mixing, or incineration will make that the total carbon footprint in most cases will be 3 to 4 times the carbon footprint of the wastewater treatment. 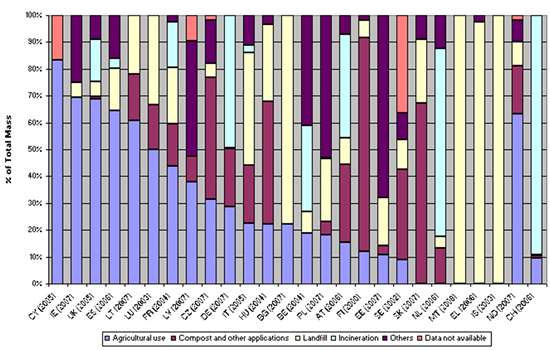 “The biological treatment equipment segment has dominated the wastewater treatment equipment market over the past decade with aspects such as nutrient removal and sludge reduction gaining increasing acceptance among both municipal and industrial customers.”

With the sustainable Turbo4bio process sludge is no longer an issue.